Coach Wooden and Me

Coach Wooden and Me is a story of true teamwork,
By: Alex Vergara 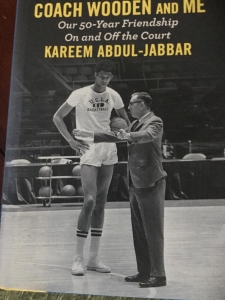 As a lifelong fan of Kareem Abdul-Jabbar “Wooden and Me” is truly a journey of the long road to wisdom. This was my first read of any of Jabbar’s books which he has published during “second chapter of life” as a New York Times best-seller author.

All I can say is that the book moved me. Like most young basketball fans of decades past, I grew up a huge Jabbar fan growing up on his road from Power Memorial in New York city (before his conversion/name change from Lew Alcindor) to becoming the all-time leading scorer in NBA history. The 60’s, 70’s, 80’s were a tumultuous time for our world and our country and as a young activist, Kareem didn’t back down from his new found beliefs and took an early leadership role as one of the youngest sports hero activists, along with other all-time greats at the time like Jim Brown, Bill Russell and more. If you played basketball (which I did as youngster but not very well and with no hops) John Wooden and his famous pyramid of success become one of the first motivation programs that I studied.

The story is a true statement in the synergy of two great people. Individually they are both on the Mount Rushmore of basketball, sports, coaching and social issues of their day. Together, the duo created so many more learnings for the reader as both titans moved through the different stages of life. Kareem’s writing skills and his perspectives on social issues, family, faith, and relationships, both on and off the court came to life for me as a result of this page turner.  The author tells us that as he was learning from his respected mentor/coach, as an African-American, and converted Muslim he recounts how a lower central Indiana small-town upbringing couldn’t have been a more extreme combination.

He writes that it took him 50 years to write this book inspired by Wooden’s teachings but a couple of pictures of him and Wooden (taken during an early practice session,) his last steps on the famed Pauley Pavilion court that garnered 11 consecutive National Championships, a record that will never be broken. Jabbar mentions he had never seen the photos which became symbolic bookends for their life journey together as teacher/learner, coach/player, and friend/friend evolving relationship. Both men were awarded Presidential Medal of Honor, the land’s highest civilian award. Together, they became one could argue the best duo ever in basketball.

Kareem’s simple but powerful writing talent takes the reader to Wooden’s humble trophy adorned-den where later in life he often visited the aging legend. The author takes us to their frequent diner locations were fan interaction for both autographs and even racial slurs often made the naturally-shy Jabbar quite uncomfortable and the wise coach more sensitive to racial feelings of the era. One story recounts a road trip on the Bruins team bus after another UCLA victory. On the trip, Kareem tells his teammates of his faith conversion. Kareem’s written word literally transported me there with the two of them. No technology. Just one word. One sentence. One paragraph at a time.  He made their long and complex journey very simple.

Wisdom is a powerful tool for the journey of any lifetime learner. Kareem shows that developing the gift with his close coach/mentor/friend impacted both human beings greatly.

More importantly, it changed the sports world even more.

Add this one to your bookshelf.

Share It
Influences, The Future, Thoughts
0 Comments
What’s on Your Bookshelf?
September 6, 2018 0 Comments

What’s on Your Bookshelf?

Coach Wooden and Me